﻿
Such a night, such a night, such a night!  The Room was beside itself this past weekend, graced with the magnificent talent of Mr. Henry Gray, on keyboard.  If you're a big fan of Howlin' Wolf, that's Mr. Gray playing on those songs for over a decade of musical history and perfection.  If you love "Little Red Rooster," that's Mr. Gray on piano.  If you love ANY American music since the 40's and 50's, you have Mr. Gray and his colleagues to thank.  He's played, too, with other American Greats: Jimmy Reed, Junior Wells, Bo Diddley, Willie Dixon. This is the man every band you're currently listening to was listening to in order for them to start banging out their rock 'n roll and alternative indie.  This man.  An unforgettable night of boogie woogie and blues.

You see those talented musicians onstage playing with him?  Bob Corritore, harmonica; Chris James, guitar; Brian Fahey, drums; Patrick Rynn, bass.  You see how they're looking over in Mr. Gray's direction?  They don't need to work the eye cues, they're too talented themselves for that.  They know where the song is going.  You know why they're watching that man?  Because a legend is playing those keys. A legend was in the Room that night.

Pssst! Want to know what makes a bluesman different from other men?  I asked Mr. Gray if he needed some help getting back onstage after a break and he replied, "Naah, I can jump back up there!"  87-year-old man, playing 'till 1:00 in the morning.  That's a bluesman.  And, oooh, that hug he gave! 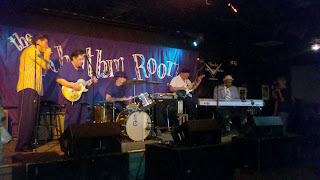 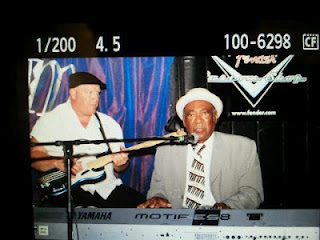 (Lyrics by Mr. Willie Dixon)
Posted by Cynthia at 1:12 PM No comments:

Extra Whipped Cream with That, Please 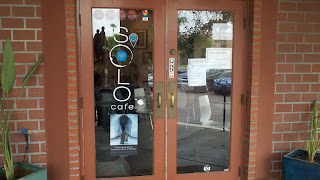 How sweet it is! And caffeinated!  The happening coffee and decadent treats shop in Tempe, Arizona, Solo Cafe Tempe, has the cover of THE DAY JUDGE SPENCER LEARNED THE POWER OF METAPHOR displayed on their front door -- just below their own logo.  If you're in the area, try a cafe mocha and one of their delicious pastries.  You can't help but love it.  The place is always swamped with locals and their laptops, with a cup of java steaming at every table.  Look closely at that photo -- beyond the door's reflection, just to the right of the logo's "L," you can see a fellow hard at work on his great American novel.  Great place. Thanks Solo Cafe!
Posted by Cynthia at 12:39 PM No comments:

New Poems Out for Summer

New poetry out from Georgetown Review. Best part? My poem, "If When You Do, You Cry to Me" opens with a sweet epigraph as sung by the late, great Solomon Burke.
And more new poetry out from Broad River Review.

It may on its face seem to be a poem about nature, but then Louis Prima, as usual, makes an after-hours lowdown appearance.
Posted by Cynthia at 4:16 PM No comments: