If you're going to work outside the proverbial box, and be brave enough to give a poetry reading at a women's clothing retail shop, with a 35% off the merchandise incentive, as Aretha would say, "Don't fight the feeling."  Take my advice: no amount of mini-candy on the poetry table will suffice.  No book arrangement in the shape of a horseshoe will suffice.  No floral display in a lovely, large glass carafe will garner any attention.  Heed this: position your poet-table at the cash register counter. Hawk your wares from that position.  Advantages: avid audience, finally single-minded in purpose; no yelling over the piped-in store music; no competing with the hanger-swishing noises across the racks and racks of clothing.  Did I mention the now-finally avid audience?  Other upside: already have the candy for Halloween handouts!
Posted by Cynthia at 5:00 PM No comments:

First thing: the entrance to Antigone Bookstore was virtually impossible to get to.  The city of Tucson is in the midst of installing a light rail system, which runs directly down 4th Avenue, Antigone's thoroughfare. Chaos and bewilderment, to say the least.  No parking.  Lots of chain link fences. The street itself now a meandering walk-through, jackhammered asphalt, shiny bright unfinished rail lines in shiny bright new asphalt.  The cool university bohos took it all in stride.  Lisa, who I was reading with, was unable to make the reading at the very last minute.  Which I didn't know.  Liza, the moderator for the Other Voices series, was unable to be there because she caught a nasty cold from her child.  Which I didn't know.  I knew nothing until I sauntered into the bookstore, only to be met by Debbie, one of the proprietresses.  Her face bore a combined look of I-take-this-all-in-stride-only-some-of-the-time-niceness, and some measure of winced concern.

What Debbie didn't know I knew because I now know, finally, from so much darn mishugina sweet life, is to expect nothing, and raise my aim.  I sat calmly in the back with "But the Gentleman to My Right" Daniel Edlow, and reviewed my set list.  I was bemused by my own calm.  As usual, the gentleman was an exemplar of regal quietude.

And then, as if sprung from the bookshelves themselves, people gathered.  The crowd grew into an intimate, energized gathering.  It was a special crowd, as there were local Tucson legends present, and above all, people I didn't know, and they were so, so present as I read those poems.  And that was the moment when I realized the lesson was, as usual, mine to learn:  I did not race my way through a single poem.  During "The Birthday Earrings," which begins with the remembrance of an early boyfriend who later in life has a full-scale sex-change operation, which gets somewhat graphic, to the same poem ending as a love anthem to my cat, I read each line, each word, purposefully and with variable weight.  The poem which was my first-ever request from an audience member, "Autopsy: Upon the Tamis Table," is fraught with one graphic and distressing, if not fully disturbing, image after another.  Additionally, it's well, uh, medical.  And I read that poem so the people could see and feel each moment, each item of specificity.  "Bad Boy in Post Office" -- I wired that poem to hit all the comedic moments spot-on, instead of a bleeping-miss on the beat after.

The audience nodded in affirmation during whole segments of poems, some rocked gently back and forth in their chairs sharing their own exhibition of relating to something assorted poems were saying; at the humorous pieces, they laughed aloud unselfconsciously.  Their gift of comradery with my work allowed me to see with immense clarity what I'd only briefly speculated on in the past, and once or twice happened upon by accident.  My voice.  The poet's voice is the primary tool in a live presentation.  I know this may sound elementary to some of you, but for most poets it is SO hard to get up at the lectern and read their art.  The poem on the page awaits a driver.  What these musicians I've been hanging out with have been working to get me to see is true.  All the vocal devices -- modulation, inflection, pause, intensity -- that's what serves an audience.   Without the voice, the poems are designed to be heard aloud in the mind.  I cannot believe how much I intrinsically learned how powerful the voice is designed to be.

And the second thing I learned?  That "But the Gentleman to My Right" is an honor to know.  Julie Andrews said it best for me in "The Sound of Music," when she sang these lines "...Somewhere in my youth or childhood, I must've done something good..."

The third thing?  Being my own cashbox for the first time was a wild, wonderful trip!  To take money for my own work?  Exhilarating.  Bizarre.  Thankful.

Big Poetry Reading for the Other Voices Women's Poetry Series in Tucson this Friday night at 7PM. I will be reading with Lisa Zaran at the legendary Antigone Bookstore. 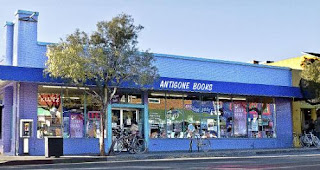 I've received my very first request to read a poem from my book for someone who will be attending the reading.  This is so exciting for me, especially since the poem is "Autopsy: Upon the Tamis Table," the first poem that opens the book. And, I've never read this poem before in front of an audience!  Here are a couple of lines from "Autopsy...."
...Stomach a dress shirt
folded over then under to lessen
wrinkles. Cropped runt of a left lung
obliging the muscle of all muscles. Endless
astonishing intestine, like the champagne
ruffled skirting around a buffet table....

Tucson, we'll be there on Friday.  If you're in the vicinity, please come on out to Antigone and share in the poetic festivities.

Posted by Cynthia at 8:56 PM No comments:

Turn Up the Heat

Calling all poetry lovers in the Phoenix area: I'll be hosting the First Friday Poetry event this Friday, September 7 at 7PM, at Changing Hands Bookstore in Tempe.  The featured reader Friday evening will be two-time national poetry slam semi-finalist Bill Campana, and all I can say is, fasten your safety belts,  Bill's poetry takes no prisoners!  It'll be a rollicking good time.  An open reading will follow.

Posted by Cynthia at 2:47 PM No comments:

I can't help but feel thrilled today.  I just recently received an acceptance from an awesome literary journal on a few poems of mine that will be in my new collection of poetry.  These poems are completely different from anything in my debut collection.  One editor described them as having "edgy, sweet humor." Exactly the tempo I was looking for.  When I read them in front of audiences, they receive outright belly laughs.  And now they've found a great home at a wonderful journal.  Blessings! And this editor is astute, boy.  Right between the eyes.  Not trying to be cryptic, but when the news is brand spanking new like this I like to hold on to it a little longer. Stay tuned!

And to top it off, the editor/publisher of my debut collection has just bought an amazing, enchanting bookshop, with expansion across the road to hold workshops, seminars, readings, and other assorted and sundry literary efforts. And!, with a back area like it's out of a fairy tale, with assorted tangled bushes and trees and rock walls and endless possibilities.... All of us poets associated with Salmon Poetry are absolutely GIDDY with joy and excitement!  Jessie Lendennie, our fearless leader, is, unequivocally, a stellar woman.

Why not try a little giddiness yourself?  It doesn't hurt at all; in fact, it's a pleasure.

Posted by Cynthia at 4:06 PM No comments: