Getting Familiar with Stephen Dunn 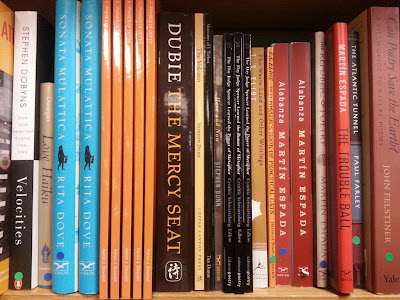 Stephen Dunn is hugging up on me and I'm swooning with joy!   Bookwise, that is. --
Posted by Cynthia at 11:58 AM No comments:

"In my mind, I already had it," he said.   The master drummer James Edward Knowles. 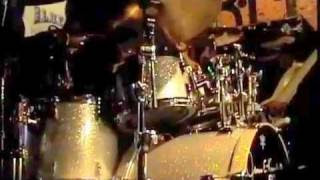 Posted by Cynthia at 4:25 PM No comments:

Thank you Mr. Redding. Thank you kindly. How I wish you were still with us. A true poet in your heart, you were.

So, in honor of Nat'l Poetry Month, in the past one week alone, I’ve attended three poetry readings, captured four astonishing poets delivering their work, read the most profound debut poetry collection I’ve ever encountered, and drove, by myself, 92 mph down I-10 to , and back to Gilbert. And lived to tell.

So much to herald I’ll try to allow the pictures to do most of the talking~~~~~~~Last Friday I was honored to host the duo poetry readings of John Gosslee and R.S. Mengert at Changing Hands Bookstore. It was a lovely evening filled with the audience's camaraderie for the commitment to poetry. Nights like that are really magical. The Lowdown:

R.S.Mengert: engaging, charming, strong imagery, narrative poet. God bless him, he wore a coat and tie, with a vintage tie clip. He is a fine poet, writing good sound work. And you could not meet a nicer person. He is currently teaching at Phoenix College, so if you're a budding writer or poet, for goodness sake's, get over there, enroll and take a class with him. You'll be happy you did.

John Gosslee: promoting his book 12: SONNETS FOR THE ZODIAC. Wild man, wilderness poetry, lyrical, vexing, teasing. Looks eerily and exactly like a young "Moondance" Van Morrison. [Can't help but score him big points for that one.]

John is throwing red-wax-sealed bottles into large bodies of water as he traverses the country on his book tour. Each bottle has one of his poems inside. I was so enthralled by the bottle he brought up to the lectern that at the afterward party in the pub next door, he gave me that particular bottle: #62 out of 150. The poem inside is called “Portrait of an Inner Life.” It perches atop my writing desk these days.  I love everything about it -- the poem inside, the numbered scrap of paper, thick crimson wax atop the bottle, delicate red ribbon that emerges out of the wax, winding its way down the length of green glass. [He scored more points for that one too.] 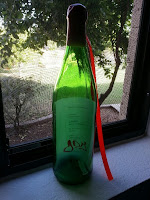 What's a woman to say? You can become seduced by a bottle.

A few days later it was off to the Tempe Center for the Arts to hear the endearing clarity of the poetry of Jeredith Merrin. Her poetry is breathtaking in its normalcy. I found myself so moved by the decency and precision in her work. I knew I'd be a fan of her poetry for life. She has two collections out, BAT ODE and SHIFT, both from The University of Chicago Press. Her poetry consistently reminds me ~~ tell the truth, tell the truth. Bells and whistles are for cows and trains. Here's one of her brilliant, serene poems:

FAMILY REUNIONThe divorced mother and her divorcingdaughter. The about-to-be ex-son-in-lawand the ex-husband's adopted son.The divorcing daughter's child, who isthe step-nephew of the ex-husband'sadopted son. Everyone cordial:the ex-husband's second wifefriendly to the first wife, warmto the divorcing daughter's child'sgreat-grandmother, who was herselflong ago divorced. Everyonegrown used to the idea of divorce.Almost everyone has separatedfrom the landscape of a childhood.Collections of people in citiesare divorced from clean air and stars.Toddlers in day care are partedfrom working parents, schoolchildrenfrom the assumption of unbloodieddaylong safety. Old people die apartfrom all they've gathered over time,and in strange beds. Adultsgrow estranged from a Godevidently divorced from History;most are cut off from their ownhistories, each of which waitslike a child left at day care.What if you turned back for a momentand put your arms around yours?Yes, you might be late for work;no, your history doesn't smell sweetlike a toddler's head. But lookat those small round wrists,that short-legged, comical walk.Caress your history--who else will?Promise to come back later.Pay attention when it asks yousimple questions: Where are we going?Is it scary? What happened? CanI have more now? Who is that?

And then it was a race to pack an overnight bag. The next day I drove down to Tucson, which from the Valley is a line as straight as a ruler, but if you know me you know that driving a car is not a highlight for me. It is not a joy; it is not an achievement. This does not mean I am not a good driver; it only means I do not care to be a driver. I care to be a "driven". But I do know the meaning of "imaginative speed" if my back is to the wall. And by the way, if you're interested in a trickle of water for a shower and very low, low light to get dressed and made-up in for a hotel room, but you want everything else to be really hippity-hop, chi-chi, reserve a room at aloft. 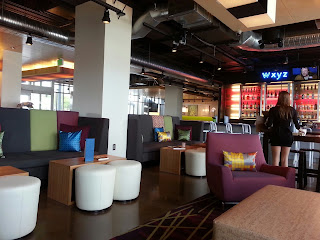 You may not feel like you got all the shampoo out of your hair, but if you want to sit on a lobby couch, surrounded by kitschy furniture and eat so-so finger food, this is the place.

But with it, I put up. Because I'd come to hear a seer read at the University of Arizona Poetry Center. Ilya Kaminsky was reading. And this reading I will never forget. Yes, he looks like an overgrown cherub, and yes, he's received more accolades than the next twenty poets behind him. Yes, he wore the obligatory washed-out jeans. And yes, due to his deafness, and his thick, tone-impaired Russian accent, his voice is like listening to tumbling crystals through roiling porridge. And yes, his book, famous now, DANCING IN ODESSA, has deservedly won numerous prestigious awards. And yes, his subsequent book, MUSICA HUMANA, too. The poems, as he was reading them, were displayed on film on the wall behind him. Poems crammed with the kissing of the behind of knees, the singing and unsinging in the streets of cities possibly there and possibly not, the worshipful appreciation of a loaf of bread.  The crowd grew so large they had to open the Poetry Center's wall, which really is elaborate glass doors, so that they could add eight, nine rows of twenty chairs, each row, outside into the courtyard.  You know how sometimes at a reading you'll let your mind drift, or look around at any sort of movement,  or crane your neck to see who's just arrived? This did not happen that night. I tell you, we sat entranced. The 150+ of us. We didn't move a muscle, collectively. At one point, he looked up from his book and he said, "Are you all asleep?" You could hear a pin drop, we were so mesmerized. I swear this is true. Ilya Kaminsky identifies himself a poet, but believe me, this man is a rabbi. 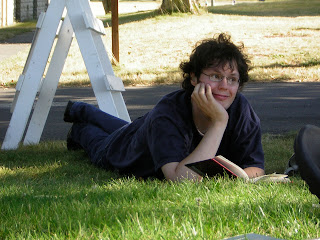 The wonderful debut collection of poetry I've discovered? The astonishing one? The one that makes me weep with the pure joy of its poetry? There's been a lot of talk lately about "The Next Big Thing." Everybody loves the moniker. We've all been bandying it about in reflective self-interviews. I have found the poet who fits this mantle, without any fanfare whatsoever. Her name is Lynn Melnick. Her book is IF I SHOULD SAY I HAVE HOPE, just out from a great independent lit press, YesYes Books. This is a picture of her. She is unassuming, humble, kind, sweet, humorous, generous and as gifted like an angel poet. One day the baton will be passed to her.

I don't say this often. In fact, I don't believe I've ever said this before.
Lynn Melnick. The real thing.

Wallflower
It used to be that I was the prize
for stalking shadows, for keeping your trap shut.
I'd paint a corner to set myself in,

round that corner, smash a corner to see
what sprung up next. When I knew you loved me
you let me stay the night.

If I were you I'd erect a staircase and I'd climb
stone by stone just to escape myself.
Believe me, I've tried.

But you wanted me with you.
And I get it now.
The fronds are grooving on their flamingo stalks.

They're all we like about what we call California.
Here's our world, then, a dawn in the distance.
If you had told me, when I could speak only in whispers,

that the light hitting the sickly coral of the beach hotels
could travel further inland
and all the way east to find me,

this spot of a girl, grayer and gray and pink,
I might have hastened from my ambush
angling upward to the moon,

black and gravitational,
upending the illuminated trappings
we cannot live in this life without.

Posted by Cynthia at 5:23 PM No comments:

April Comes in with an "A" as in Alphabet


New venues coming for poetry readings! New acceptances of poems at literary journals later this year! Brand new poems being written, and revised, and tussled with, and ironed out. It's a great month to make friends with the written word, folks!
Posted by Cynthia at 12:37 PM No comments: